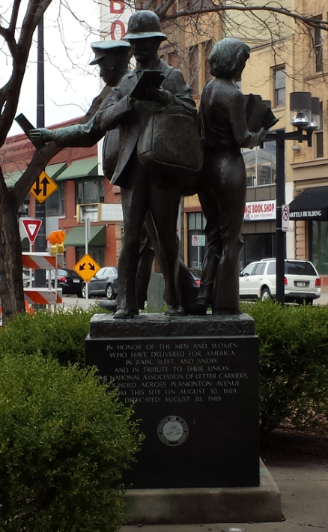 Letter Carriers’ Monument, Milwaukee.The monument was dedicated in 1989, the 100 year anniversary of the GAR Encampment which allowed veterans who were letter carriers to gather and form the NALC.

At first appearance Milwaukee’s Letter Carriers’ Monument shown above does not seem like it would be related to the Civil War. But through some round-about research on a World War I Memorial that originally stood on this piece of ground, I discovered that these three bronzed postal workers represent an interesting story how some Civil War veterans found meaning in their lives after the war (and paved the way for future veterans) as letter carriers. 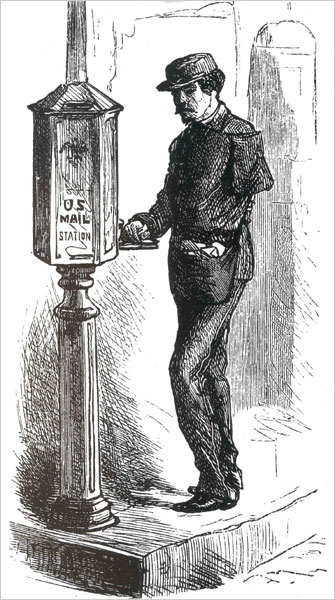 In August of 1889, the Grand Army of the Republic (GAR) held an Encampment in Milwaukee. Postal Carriers, many of whom were Union army veterans, took advantage of the large numbers of veterans converging on Milwaukee and set a meeting to discuss their industry. Indeed, free home delivery of mail was established in 1863 and an Act of Congress in March,1865 paved the way for disabled soldiers to be given preference for federal jobs like the increased demand for letter carriers. 60 veterans who were carriers from 18 states met in Schaefer’s Saloon which stood near 800 N. Plankinton and formed the National Association of Letter Carriers Union. They asked for and received an eight-hour work day, a higher pay scale, a pension plan, and service stripes for every four years of service. The NALC reconvened in Milwaukee to celebrate its 50th anniversary in 1939 and the Milwaukee Sentinel welcomed them with this editorial.

“Yet the handling of each letter, each piece of mail requires an intricate organization, with men in it of the utmost efficiency and fidelity. It is not an accident of rhetoric that one of the finest of statements pertaining to a service is that written of the letter carriers and engraved on the New York post office:

“Neither snow, nor rain, nor heat, nor gloom of night stays these couriers from the swift completion of their appointed rounds.”

I think this message exemplifies the legacy that Civil War veterans had on the on mail industry. A sense of duty, organization and military field experience all lent itself well to a career as a mail carrier. Those who had disabilities carried daily reminders of the war but it also reinforced the appreciation they felt to have a meaningful job to come home to.